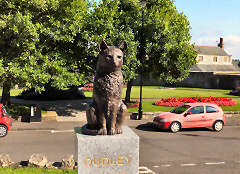 The first Burgh Trust public art project was managed by Burgh Beautiful Linlithgow.  The group was responsible for the installation of the bronze sculpture of Dudley at the Linlithgow Union Canal basin in memory of Liz Burrows, who supported Burgh Beautiful, loved the canal and left a sizeable legacy to Burgh Beautiful when she passed away.

Working with the Linlithgow & Linlithgow Bridge Town Management Group and the former Linlithgow Town Centre BID, Linlithgow Burgh Trust, through its Public Art Committee, is promoting the installation of two bronze sculptures based on Linlithgow's two traditional civic insignia of the 'Black Bitch' and St Michael, as depicted on the town's ancient burgh seal and coats of arms.  The project is now fully funded, thanks to the generosity of numerous local groups, national organisations, families and individuals.  The 'Black Bitch' sculpture is now in place, having been officially unveiled by Provost Tom Kerr on Friday 31 January 2020.  The completion of the St Michael statue is expected in October 2020.