IMPORTANT: The Trust have been monitoring the Scottish Goverment COVID-19 restrictions over the course of the last few week and have, regrettably, taken the decision to CANCEL the 2021 Perambulation event which was due to take place on the evening of Wednesday 9 June. We remain hopeful that the 2022 event will be possible.

In the meantime though, we would remind everyone that the route of the Perambulation is a walk that can and should be enjoyed at any time of year. Why not download the route map from this website and use it to explore some of the points of interest around the town and get some exercise and fresh air at the same time. It involves a 4 mile walk round Linlithgow's 1832 Parliamentary boundary. 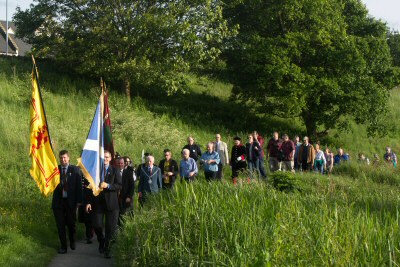 The Perambulation is headed up by the Provost of the Deacons' Court, supported by flagbearers, halberdiers and the town piper, who will play at each of the march stones.

Those taking part meet on the pavement outside St Ninian Craigmaillen Church and proceed on a conducted tour of Linlithgow's 1832 Parliamentary boundary, walking along the south shore of Linlithgow Loch, past Linlithgow Palace and the Peel, then passing St Michael's RC Church, West Lothian County Cricket Ground and the site of Newlands Agricultural Works to join the Union Canal near the site of Linlithgow's former Poor House and then along the canal towpath to Manse Road.

There is a short refreshment stop at Linlithgow Canal Centre (LUCS are providing refreshments, payment by donation) and the Linlithgow Reed Band will be playing.

The walk then proceeds up Manse Road, passing the site of the Carmelite Friary, one of the original boundary marker stones and the Fountainhead of Palace Well before greeting the Linlithgow and Linlithgow Bridge Childrens' Gala Day Queen in Rosemount Park, moving on to Preston Road and returning to the West Port, where refreshments will be available in the West Port Hotel.

Those completing the perambulation receive a certificate.

There is a free leaflet that covers the route and points of interest along it, produced by Linlithgow Civic Trust, which is available from the Library, the Burgh Halls, Far from the Madding Croud, the Canal Centre Tea Room, and many other local venues throughout the town. It is also handed out on the day before the start of the event.

This project, involving the installation of seven new march stones, footpath improvements, an interpretive panel and other works, was made possible through a "Sharing Heritage" grant of £9,900 from the Heritage Lottery Fund and additional funding from Linlithgow and Linlithgow Bridge Town Management Group, Linlithgow Civic Trust, Burgh Beautiful Linlithgow and other local organisations.